As soon as the bell went I heard Mr Burt’s thundering booming voice saying “$1 $2 $3 number 21 going once going twice going 3 times and sold to number 21”. We were at school for our Immersion Assembly to learn our new topic for this term.

The first teachers to go up in front of the school was team 1 which was the year 1’s. Their topic was all about money. They said that they're trying to earn some money by working hard and being good to their teachers.


My  favorite team was team 4 because they were all learning about being good with money the teachers names who were acting on stage were Calm, Sassy and Really Happy. They were very funny because how Mr Somerville was acting like a  girl and how he was walking.

I thought that our Immersion Assembly was the best Assembly ever because I got given lots of chocolates. I felt very excited because team 1 scrambled a-lot of money chocolate. This terms topic for 2015 was called Trade & Enterprise. After a long while I felt very tired.
Posted by Hinerangi at 13:12 1 comment: 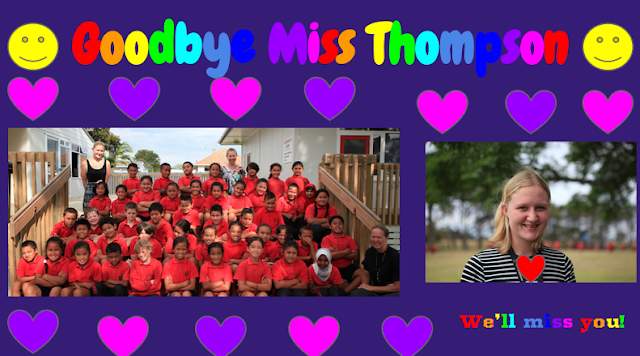 Dear Miss Thompson It's me Hinerangi and I would just like to say you were the best teacher I had ever had hope you have a safe trip to your new school all the best to you and your class hope we see you sometime again and hope to everyone who you are going to meet. We'll miss you for the best all my hugs to you from Hinerangi. . .
Posted by Hinerangi at 14:25 1 comment:

Last week friday there was a special kapa - haka performance happening in front of the whole school. I was very excited when I got on the stage because when I got on the stage I  became very happy. Miss Whaea Saph and  Whaea Pari taught us how to sing special waiatas from their own culture. Learning with them was lots of fun and they brought their son and cousin in to learn some more about kapa-haka too.

Whaea Pari’s son was called Falcon and he was only nine years old. When Falcon appeared  from the stage he was very excited as well. Falcon’s  dad’s name was called Matua Arts he was Whaea Saph's cousin and Falcon was Whaea Saph's nephew. As soon as he came in the hall he was really shy because he saw a lot of people in the hall so he didn’t go on stage.


When all the kids were in the hall we started performing our 2 waiatas called the haka and Aue Rona.
We all were performing those 2 waiatas in the hall but the first thing we did  was that we learnt waiatas from Whaea Pari, Matua-Arts,falcon and Whaea Saph. They were the only ones who taught us  the 2 waiatas so that we learn lots of special waiatas. So in the hall Matua-Art, Whaea Saph and Whaea Pari came to see what we were up to. Suddenly we all became very happy because everyone who taught us how to do the songs had come to the hall to see if we get it right. If we hadn't have gotten it right it would of been a big rush.

Posted by Hinerangi at 10:26 No comments:


Hinerangi Term 2 Mario from Team 3 PES on Vimeo.
Posted by Hinerangi at 09:31 No comments: