SLJ: The Waiata - A song in your heart:)

Activity 1: The Waiata - A Song in Your Heart 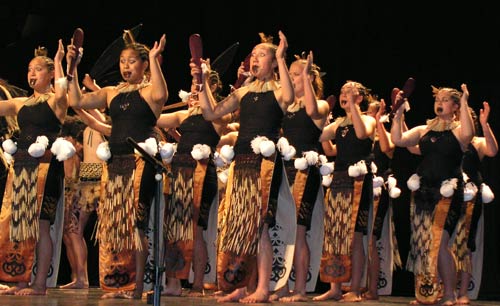 Here in New Zealand was held a huge Kapa Haka festival which always happens every two years.
The festival was called Te Matatini. This was a performing arts festival which celebrates the
tikanga maori (culture or customs). There were many Kapa Haka groups from all around
Aotearoa and were invited to attend the annual festival. Each group has 25-minutes to perform
there incredible item. The performances were judged by many people but only the best of the
best teams would win the prizes.

Well as I was thinking about Maori Waiata I just remembered a few waiata from School, a few from
youtube & from my incredible whanau. My 2 most favorite waiata is Tiaho Mai Ra & Ka pioioi.
I love listening to a bit of maori music as it is apart of my culture. I had chosen both these waiata
because they both feel / sound really powerful. Tiaho Mai Ra is such a really powerful song as I was
said by my great, great nana. Unfortunately I don’t know what the meaning is & why it is called
Tiaho Mai Ra. Ka pioioi as I was said, that the Ngati Ranana Kapa Haka group performed at the open
ceremony in London held on the 12th of October in 2010. That is how I knew Ka Pioioi. I really love
both waiata’s because it is fast to learn the lyrics & especially the actions.

Many years ago, young Māori kids learned how to play different games, including
Poi Rakau, Ki O Rahi, Koruru Taonga and Poi Toa. Read about each of these four games
on the Rangatahi tu Rangatira website. Have you played any of them before? Isn’t it great to
see many games pass down for many generations?

The game I have chosen is Poi Rakau. The two rules about Poi Rakau is that when
the rangatira ( Leader ) calls out Left or Right, but in Te Reo Maori it would be Maui or Ratau,
once you've heard that been said by the leader you would have to adjust yourself to the
spot / place your opponent was standing. Another rule would be that everyone who is
playing Poi Rakau will have to be standing in a circle holding a pou ( a pole each.

My ever first time playing Poi Rakau was when I was a year 4 at Pt England School.
Poi Rakau has been out for many years & is still often played in these days. Poi Rakau is
such a fun game to play for those who love to play with objects / Items & many more
awesome things lying around your house. I would love to try Poi Rakau again as I haven't
participated in this in a very long time.
Posted by Hinerangi at 15:07